Turmeric is one of the fastest-growing herbs on the market. You can now find it in a variety of food and beverage products, like Thrive Remedies Recovery adaptogenic tea. It is also frequently used in cosmetics, dermatology products and supplements. Turmeric isn’t anything new. It has been a part of the culture, cuisine and healing traditions in South Asian countries for centuries. It has long been used as a vibrant spice to flavour curry dishes and in ancient medicines for its healing properties. Traditional Chinese Medicine and Ayurvedic believe that turmeric can help strengthen the body, relieve gas, improve digestion, relieve arthritis and regulate menstruation.

Because of the overwhelming amount of health benefit claims, turmeric is one of the most frequently discussed herbs in the science world. We’ve done the research for you and put together a list of some of the extraordinary evidence-based health benefits of turmeric. 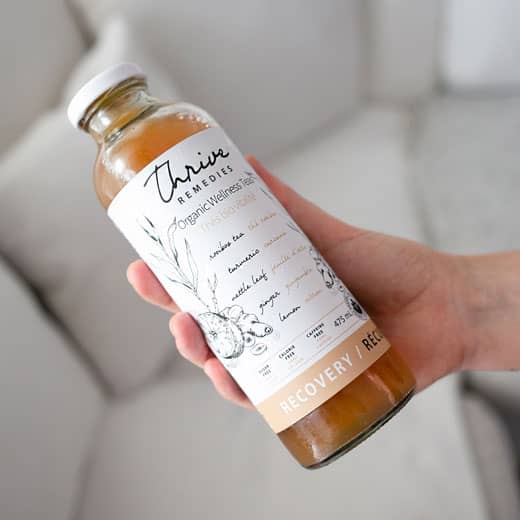 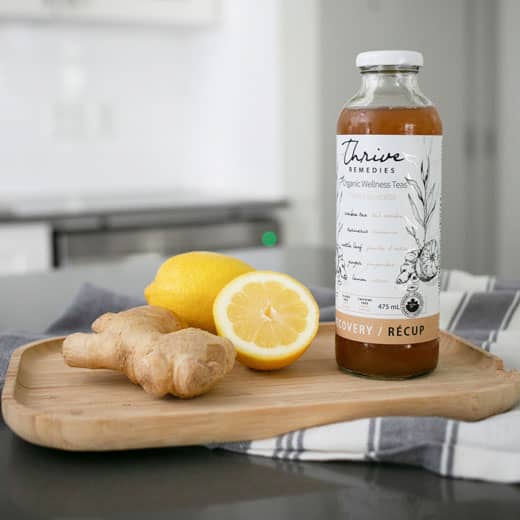 Turmeric comes from the root of a plant native to India and other Southeast Asian countries. It is a member of the ginger family and has a distinct yellow or golden colour. You can find it in capsule, powder, tincture and tea form. The active ingredient in turmeric is curcumin, which gives it the majority of its healing properties.

It is recommended to take between 500mg to 1000mg of curcumin per day in order to receive the health benefits. One teaspoon of turmeric only has about 200 mg of curcumin in it, so supplementation with latte’s, smoothies and tea are a great way to ensure you’re getting the desired dose. When cooking with turmeric, try pairing it with black pepper. Black pepper increases the bioavailability of turmeric allowing your body to properly absorb it, making the most of its wonderful health benefits.

Always speak with a licensed healthcare practitioner before taking herbal supplements as they do not agree with some medications or conditions.

Some inflammation is good. It’s a natural bodily process, but chronic inflammation can lead to the development of numerous diseases and conditions, including Alzheimer’s, arthritis, heart disease, diabetes, depression and allergies. Turmeric is most well known for its ability to fight inflammation. Curcumin, the active ingredient in turmeric, blocks the activation of inflammatory cells. It may even be more effective than Ibuprofen or Advil at reducing inflammation and the related symptoms. Studies show that curcumin can help improve symptoms related to several inflammatory diseases or conditions, such as PMS, allergies, inflammatory bowel disease and arthritis.

Arthritis is an inflammatory disease that has no cure to date. There are treatment options available, but they are often not suitable long term due to their undesirable side effects and effectiveness. Adaptogens and herbal remedies, including curcumin, are usually recommended as an alternative or in combination with other treatments.

Several studies have proven the effectiveness of curcumin in treating symptoms of arthritis. In each study, participants saw a considerable reduction in their arthritis symptoms, like pain, swelling and stiffness, compared to the placebo groups. The groups treated with curcumin also had similar results to the groups treated with Ibuprofen, but they experienced fewer side effects.

Heart disease is the leading cause of death in Canada. There are many contributing factors like diet, exercise, age, genetics and unhealthy habits that can cause damage to the body’s circulatory system. Curcumin can reverse the damage that can lead to heart disease and could potentially be used as a preventative measure.

Curcumin has been shown to reduce inflammation, lower cholesterol and triglyceride levels and improve blood vessel structure and function. In one study, participants undergoing coronary artery bypass surgery were given 4 grams of curcumin daily for three days before their surgery and five days after. They saw a 16.9% more decrease in the risk of having a heart attack after surgery than the placebo group.

High-intensity exercise puts stress on your body, causing muscle damage and inflammation, which can lead to fatigue and decreased physical performance. Supplementation has been proven as an effective way to reduce the symptoms of muscle damage from exercise. Recently, several clinical studies have begun to look at curcumin specifically for its ability to improve athletic performance.

Participants from various backgrounds, ages, gender and athletic ability took part in the studies. They were given varying doses of curcumin for different lengths of time. As a result, they saw a reduction in inflammation, oxidative stress, pain and muscle damage. They also saw an improvement in recovery time, muscle performance, brain function and digestive function.

Antidepressants or anti-anxiety medications don’t always work for everyone, or they can have some undesirable side effects. This has sparked considerable interest in finding safe and effective herbal alternatives with antidepressant properties. Over the past few years, curcumin, in particular, has become the interest of several clinical trials with promising results.

Curcumin can alter some biological functions associated with major depressive disorder (MDD). It has been shown to positively affect serotonin, dopamine and antioxidant activity, immune and inflammatory response, stress pathways and brain function. All of which contribute to symptoms of MDD.

Turmeric has been used for thousands of years in traditional Chinese and Ayurvedic medicine to treat diabetes. Recently, it has been gaining scientific attention for its potential as a treatment. Studies show that curcumin may help treat and prevent type 2 diabetes and complications of the disease because of its ability to reduce inflammation and regulate blood sugar and blood fat levels.

In one study, 240 prediabetic participants were given 250mg of curcumin or a placebo for nine months. At the end of the trial, 16.5% of the people in the placebo group were diagnosed with type 2 diabetes. None were diagnosed with diabetes in the group receiving curcumin, and they had lower insulin resistance.

Turmeric is commonly used in cosmetics and other dermatology products because of its anti-ageing, antioxidant and anti-inflammatory activity. When applied topically, it can improve skin texture and tone, heal wounds, improve collagen production and reduce acne scarring.Consuming curcumin orally also supports skin health. Studies show that it may relieve irritations caused by several skin diseases, including acne, alopecia, atopic, vitiligo and dermatitis.

Curcumin can increase the growth hormone BDNF, which affects brain function. Decreased BDNF levels are believed to play a role in developing certain brain diseases like Alzheimer’s, Parkinson’s’, multiple sclerosis and Huntington’s. Because of its ability to increase BDNF levels, curcumin may prevent or delay the onset of age-related brain disorders.Curcumin may also be helpful in the prevention of Alzheimer’s because of its anti-inflammatory effects on the brain and its ability to clear up amyloid plaques linked to the development of the disease. More human studies are needed, but there are some interesting statistics out of India. Adults ages 70 – 79 years old are 4.4 times less likely to develop Alzheimer’s than Americans in the same age group. One study also found that people who consumed curry often (more than once a month) had better brain function and performed better on a standardized test than people who ate curry less frequently (less than once a month).

The antioxidant and anti-inflammatory activity of turmeric can improve digestion and liver function. Antioxidants have a protective effect on the intestines and liver. They also help balance the good gut bacteria and enhance nutrient absorption. Turmeric is currently being studied as a possible treatment for several digestive diseases and disorders, such as IBS, liver disease, liver fibrosis, acid reflux, heartburn and gut sensitivities. It may also help treat indigestion, diarrhea, gas and ulcers.

*** Disclaimer: The content on this website (Thrive Remedies) is for informational and educational purposes only and should not be taken as medical advice. It is not intended or suitable in place of advice from your health care practitioner or licensed physician. The information and products on this website should not be used for diagnosing, treating, curing or preventing a health problem, you should always consult a health care provider or licensed physician for advice. ***

Stress, anxiety, disrupted sleep, and mood significantly impact your overall health and well-being. They can creep in...

Easy, delicious cocktails are a summer staple and this recipe is a must-try! You can make a pitcher ahead of time and...

The weekday mornings can get pretty hectic between packing lunches, getting the kids ready for school, getting...